Gargoyle. For Muses Challenge. Prompt was a lion gargoyle. It is on YUPO, a plastic paper, painted with Daniel Smith water colors. Just got it framed and ready to exhibit.

(PS, all is well…known as open mouth insert foot syndrome.

Upper level winds make for unusual cloud formations...I love looking at the sky and seeing the unusual visions the clouds present us.

A “Conflation” effort:
Life:  What Happens When You Are Making Other Plans

When I was young,
time stood still.
Days sometimes
felt like years.
Now, that I am
in my twilight years,
some days seem like
they have sped by
and suddenly a month
or year has passed…
.
Early motherhood
was such a happy time,
watching the children grow, …
seeing miracles every day.
Never realized that
as time went by that
worries with older children
made the miracles
less obvious
to me as I tried
to deal with the unknowns
of teens, and adults.
.
Most people LOVE
the summer months,
I was a working mom,
and worked
a couple of blocks from home.
Every time I heard a siren,
I worried it was for my house.
Summer activities,
going to the beach, camping,
was not something
my birth family did..
nor table games or travel.
(but I did learn to play
card games in grade school:
poker, canasta, double canasta,
and a few others,
from friends whose families
had  “different values” !
I listen with envy
as others tell of fond memories
with their families
and how they loved summer
and summer was too short
instead of seemingly
forever and a day.
.
Teenagers…Foolish me…
I thought raising kids
would get easier, and not harder !
People laughed
and told me
I hadn’t experienced anything yet!
It IS interesting to watch
how others seem to breeze thru
the trials and tribulations
of their children as teens
relating to what they were like
when they were young.
They know what normal is
…I had unreal expectations….
afraid if I misbehaved,
I’d be out on the street
or disowned…
I guess they are
one in the same.
.
And, being the parent
of two adult children isn’t
the skate in the park
I thought it would be.
I thought,  foolish me,
it would be basking
in the glow of grandchildren,
a leisurely dealing
with children’s joys …HA!
.
Parallels of how I lived,
my life with my parents…
distant, private,
not sharing, didn’t work for me…
but it did for them…
no sharing of the tough times,
gave them a false sense of security,
I realize now.
I don’t have to worry
about a false sense of security
with one of my children,
and with the other,
I always wonder if their life
is as smooth as  I’m lead to believe…
two teenagers can’t be all roses
this day and age.
.
Despite my thoughts
of having the “perfect” life
and “perfect” children,
it has all turned out…
my children are perfectly fine
and good parents themselves.
I wonder if they think
of how they thought life
would be
and how life is what is happens
when you are making
other plans.
======================
.
This was my first attempt at writing a “conflation” poem…sigh.
You can see why I shifted gears ☺.
.
As I was making my egg salad sandwich which is soft,
I realized that it needed something crisp…
crisp tortilla chiips did the trick.
.
A hamburger the same, soft,
I like the crispness of potato chips here for a crunch.
.
Ice must be cold and hard,
warm ice is water, whether outside
or in your glass.
.
. 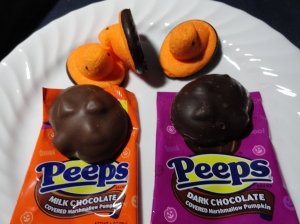 Peeps for all seasons...these are sooo good with chocolate. A natural s'more if given the chance. I don't think they'll last for me to find out next summer when old (or fresh if need be) Peeps are warmed over the camp fire for a luscious treat.

THE PROMPT THIS WEEK IS THE ABOVE PICTURE. I LIKE TO CALL IT ‘STUDY IN BLACK’
WORD COUNT – Not to exceed 25 words. Yes, that is correct. 2. 5. Twenty-five. XXV.
STYLE OF WRITING – Any
NO ADDITIONAL PICTURES

to wear with white.

or is it she wore white with black?

//and with a string of pearls.

Tonight the line at the Haunted School House is continually growing, still early, and time for the adult session to start. Fun for all ages, two times so the littlest can enjoy too, and the oldsters can have a more intense spooky experience.

Lewis a teacher
lives here, but tonight away,
visiting the schoolhouse?
.
Ghosts are real they say
and others say nay, not they.
Do you say: Yay? Nay?
.

The hurricane earlier took out the trees that used to make this house down the street a hit on Halloween...the little replacement tree needs some time to grow, and the spirits of Halloween still have found places to roost this year.

need home/food/money/laundry
sponge on parents:  get out !
.
.

My cat, Bianca, has,
after almost four years of living with me
has just started to do funny things other cats do
normally, like climb on things…
my stereo, a favorite thing to sleep on,
dining-room table,
slept on a painting that I was working on…
.

Bianca came from a shelter as a rescue…
she didn’t like other homes that had
other cats, dogs, young children,
people who thought she should be a lap cat.
She’d been returned there 3 or 4 times due
to incompatibility with other animals and people,

and inability to resolve differences of opinion.

.
She seems to think if she can’t see me, I can’t see her.  She’s
a smart cat otherwise !  She was trying to open the front door
when I noticed her on the dresser beside the door.  She turned
back to me and acted as if she was hidden from view.
.
.

The collywobbles
were unnerving as
I thought about what
it was I was about to do.
.
“Never !”  I said,”Never !”
I swore up and down,
that I’d never give in to peer
pressure.
It was a matter of class and
upbringing.
Lower class indeed.
.
I thought about how I would explain
myself.
It was so unlike me to give in
like this.
My energy became slower
and slower.
Drained by the collywobbles.
I moved like a turtle
unconcerned about the race.
My dead husband would say,
“my grandmother was slow,
but she was old.”
.
Now he said that lovingly
and in jest.
For his grandmother
was not slow,
she moved like a rabbit,
with speed and grace.
But I digress, as usual,
to postpone my trip.
.
I fed the cat,
took the collie
out for her constitutional
before I left home for
the big city.
.
The collywobbles made
me feel paralyzed in fear.
Most people get the wobbles
going in,
not wobble out
of these disreputable places.
.
I took a deep breath,
and took a cab.
When we arrived,
I got out..
and did not wobble.
I’d thought and thought,
and decided,
It will be.
my daughter’s name
wrapped in Christmas holly,
a festive tattoo
by Kat VonD.!
.
Sigh.
There’s no tattooist
a  better artist ,
nor a better
tattooist
to be found in
the world.
.
I guess it is better
to follow the
rule
“Never say never”
for it will happen
for sure
.
. 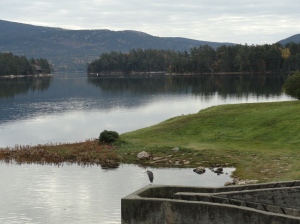 My view of Somes Sound from the reading room at the Somesville Library where the Vagabond painters meet on Mondays and Fridays every week. I love this view...will post it often as it changes thru the year...the other window has a view of the American flag...awesome also. 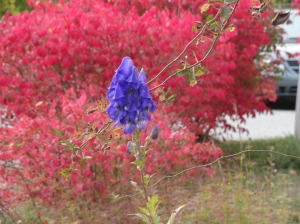 When at the back door of St. Dunstans's Episcopal Church, heading for Everybody Eats I noticted this blue flower against the red of a burning bush. Awesome. Over used word, but fits.

Everybody Eats, a community meal, you pay if you can a donation, dropped into a wooden box by the door, or no charge if you don't have the money. No questions asked. Teenagers often drop in for a quick bite or a dessert !

Yummy cake and dark chocolate for dessert at Peg's luncheon for the writer's group at ther house. She also had all the makin's for home made subs. Scrumptious.

Wednesday Portrait group/model George/...Steve, a long time/infrequent painter showed up...we were so delighted...it is rare he has time to spend with us ..it is hard work, time consuming work to be a professional painter in this economy.

Bianca feeling frisky...she's lost 5 pounds over a period of maybe 18 months...at vet's suggestion. Found a new perch today next to the tv.The flash was too bright, and available light a bit dark...sorry...did the best I could to capture what might be..or not... a one time event.

A beautiful day in Somesville Maine

Starting Friday thru this Sunday, then then next weekend, there is a Haunted School House at the Bryant E Moore School across the street. So far, very orderly and quiet.

Up to last minute/working, working

Natures present...flowers still blooming at the church...untouched by frost so far. I don't know what kind they are...but it doesn't matter they are so beautiful.