This was my Christmas tree but I find it cheery so it still has the lights on it.

Blueberry field after snow storm appears to be crimson waves.

Halloween pilgrimage to Bangor, Maine. Crimson is for blood and gore. Here lives the King of gore.

Bats on gate, ?in belfry? Only Tabitha knows.

A dragon guards the driveway. Beware it says. Strangers not welcome. 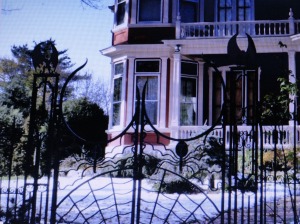 I love the crimson sky....this one in the evening, with the hope for a delightful day to come tomorrow. 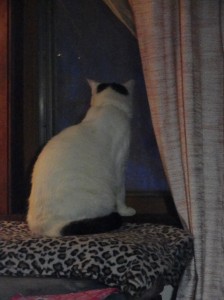 Can you see the blue glow in the lower part of the window ? It is what got Bianca's curiosty. 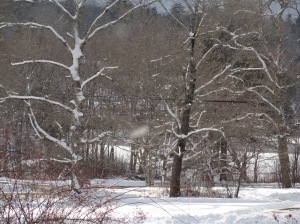 One view from my back door. Mid way you can see the Union River lightly frozen and covered with the snow of the previous night. 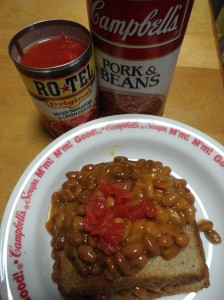 My version of a friend from Englands favorite meal...beans in tomato sauce, on toasted bread. I love the spicy tomatoes and added them.

I understand a strength in keeping a journal is

capturing the mundane along with the interesting
and magnificent events in ones life.  Well,  January,
February…I don’t know how long the mundane life
continues in Maine…Keeping a journal this way, is
showing it smack dab in the face as I try to think
of things that happened, sometimes wondering “why”,
what struck me to take the photos I took.
.
Earlier journals, no one else has ever read:  mundane
was recorded as matter of fact.
I didn’t differentiate between the mundane and
the magnificent…I was quite bland !
.
The weather often has been cold with a wicked wind chill.
On the coast of Maine, the temperature usually varies…
so it’s not every night, but some nights are damp and windy.
In the grand scheme of things, not a big
deal…..
and besides,
I have a handy dandy remote starter so I can start
my car from my living room window, no longer having to
dress warmly, and hazard a fall on my lawn…luckily
the traffic in the winter,  even on the major streets…
three of them ☺. AND few neighbors
are here to watch me scatter cat litter or ice melt
ahead of me like Gretel over icy patches
from the warmer sunny days melting the snow.
As I traipse to my car...two canes with ice pics on them,
and  LLBean ice grippers  on my shoes or boots,
now THAT was  scary.
Using gasoline at $3.50+/gallon
to start my car in the middle of the night to be sure
it will run the next morning makes me think twice
before hitting the remote button,
(okay, Maxine is rubbing off on me)
but choices, we have choices,
and I choose to live in Maine in the winter.
Besides, with the remote,
I don’t have to worry about freezing in the driveway,
having the sidewalk plow scatter the icy snow
into my driveway and over me ! 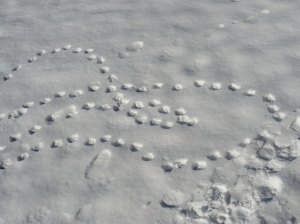 At the Somesville library, by the mill pond, a heart.

Pizza...my favorite food group...any meal, any time of the day..warm or cold. The writers' group went out for pizza and conversation. 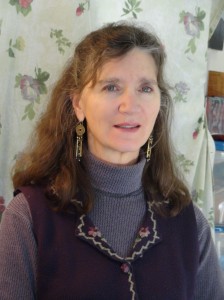 Playing games at the Senior Center. Apples to Apples followed with a large group.

Four inches of snow, no rain...and then the sun. Buddah in my back yard.

Bianca says it all on how to spend a snowy cold Saturday.

Ventured down a road that I see just feet from the Bangor road to take photos of the blueberry field that can be seen from the road. Sort of thought it to be a private road with one or two home on it, but there were many homes, some old, some new, and this place with chickens sunning themsefves in the window.

Chickens sunning in the window of the hen house.

I love the red and white of a blueberry field in the winter....waves of plants and snow.

January ice and snow…
coat the fields,
especially the blueberries,
that suffer in an open winter.
January thaw is expected,
not too long, but just right,
for a short respite from
deep freeze cold and snow.
.

A blueberry field January 22, 2012. .Growers say that blueberries need a good cover of winter snow to be healthy plants in the spring.

.
February invites Canadian
cold and snow,
that didn’t arrive the month
before.
February is thankfully short,
hopeful for an early spring…
hope runs eternal on the coast
Downeast in Maine.
.
In March, my forty plus old
tulips in their gowns
of red and yellow,
appear against the cellar wall
where it’s toasty warm
from the suns
warming rays …
it’s spring when they peak out,
green leaves at first,
letting me know
all is right in the world,
spring is here.
.

This is the only photo I have of my treasured yellow and red tulip in 2011. I apologize for the poor quality...the camera needed replacing and I didn't realize it. Some years the tulips have been even smaller than this.

.
April, if we’re lucky,
May if not,
we get to see the lovely canopy
of “spring green” as the trees
leaf out getting ready to shade
us from the summer sun.
. 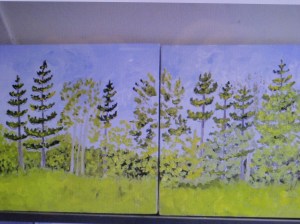 A painting of Maine trees dressed in spring colors. Some of you may have seen this...It was painted for an Alzheimer and related diseases Center that is being buildt.

.
Nature works hard
on the Downeast coast of Maine,
bringing natures beauty on land,
natures bounties
from the sea.
.
.

The road goes right along side my tree...the pink granite below is a lure for tourists of all ages.

The pink granite and the magnificant waves. On stormy days, the waves come up over the granite onto the road.

We were asked to write our perception of a memory knowing that
others may have a different perception of the same event.
I have visited this particular place many times with many people.
Some people know “where” if I say I want to visit “my” tree

There’s a tree,
a singletree,
at Schoodic Point,
Acadia National Park.
I first met her when I came
to Maine forty years ago.
.
There was something about her,
and I visit when I can.
Her branches sweep back,
like long hair blowin’ in the wind.
.
Each visit is different,
depending on the weather,
season, tourists,
local visitors to the park.
Some times of the year
are more tranquil than
others.
Awe inspiring waves
from passing storms,
guarantee a crowd,
rangers watching so
no one goes too close.
.
Surrounded by huge, chunks
of granite in various shades
of pink, carved by icebergs and
stormy weather……..
a necklace of small purple flowers
around her neck with birds sitting
on the tips of her branches,
observing the scene,
and chipmunks chasing thru
her limbs and branches.
If I time it right, there are the
tiniest Japanese Iris’ and
small yellow flowers whose
name I don’t know,
tucked between the
granite slabs.
.
I talk to my tree…she’s faithfully
there, year after year:
.
I’ve sat with you on foggy days,
when one can barely see the sea.
And on sunny days, we’ve watched
in fear as the tide comes in,
children  jumping from rock to rock
at waters edge.
You were alone when the lady
fell, swept out to sea.
What a sad day
that must have been.
.
Life has changed at the point.
The Bluenose ferry, now retired,
no longer travels along the horizon
back and forth between
Bar Harbor and Canada.
My grandchildren
now come to visit,
feeding seagulls
who are waiting for
bread and popcorn
to fly in the air….
you must laugh
when a seagull swiftly
steals an unguarded
sandwich from someone’s
lunch or snack.
.
Do you remember the day
the seagulls swooped down
scaring my Mother ?
She retreated into the car
saying unkind things to
my father who was encouraging
the seagulls to eat bread
out of his hand.
.
I’ll be back
to sit and remember,
or maybe paint
another portrait of you,
as we watch the tourists
look in awe,
at the powers of the ocean.
Children still play in the puddles
of water that was left
by the incoming tide…
the same puddles that the birds
or seagulls bathe and play in.                                                                                                                            Why does this make me laugh ?

.
You’ll still be here
long after I’m gone
from this earth.
Tourists will come,
sit in your shade
while children run playfully
and laugh…
I can hear them now.
The seagulls,birds,
and chipmunks will
come to play
in your flowing
branches.
.
I’ll return
as long as I can…
sitting on the granite
on the edge
of the road.
We can visit.
It will be good
to spend time
with an old and
dear friend.
.

What to my wondering eyes appeared as I looked for a loaf of bread ...BIMBO bread. A photo op if I ever had one. I knew if only to remember the name of the bread to tell of my "find" Of course the first person I told already knew it existed. Sigh. I read the description of the prompt, "simple" as also to mean "mundane" and then I knew I have a treasure trove of the mundane. Halleluiah. I have been saved by the mundane and wonderful photos I love to take !

Thank you Anne Dimeyer at  Pret a Voyager.com for the prompt.

.
High on a mountain top
the full moon
behind you

I saw you,
the wind
blowing
swiftly,
your stance
firm as if on solid
ground.

Your dark garb swirled,
you stared,
your gaze
never swerved.
Mesmerized,
I stared back.
Drawn to your
eyes,
wondering
what
drew
me
to you,
unable
to divert
my eyes.
.

Your dark garb swirled,
you stared,
your gaze
never swerved.
Mesmerized,
I stared back.
Drawn to your
eyes,
wondering
what
drew
me
to you,
unable to divert
my eyes.
.
High on a mountain peak,
wind from the north,
never a shiver did I see
as you stood there
unrelenting,
gazing.
Gazing.
.
And
then you were
gone.
.
Where.
.
Gone.
.
Not from my memory.
On firm ground,
in my thoughts
your vision
that remained.
.
Wondering.
.
Who.
What.
Why.
Where.
.
I saw you,
the wind
blowing
swiftly,
your stance
firm as if on solid
ground.
I’ll look for you,
in your dark garb,
gaze unswerving.
When will
I see you…
High on a mountain top.
.
.