May 29, 2014
The goal is to write a second stanza
towards the haiku (first stanza) given.
That second stanza of two lines (classical syllables count 7-7)
is your task.
With that second stanza you make the Tan Renga complete.
.
.
Here is the poem JRB’s post is based on
“In Flanders Field” by John McCrae:In Flanders fields the poppies blow
Between the crosses, row on row,
That mark our place; and in the sky
The larks, still bravely singing, fly
Scarce heard amid the guns below.

We are the Dead. Short days ago
We lived, felt dawn, saw sunset glow,
Loved and were loved, and now we lie
In Flanders fields.

Take up our quarrel with the foe:
To you from failing hands we throw
The torch; be yours to hold it high.
If ye break faith with us who die
We shall not sleep, though poppies grow
In Flanders fields.© John McCrae
.
.
Here is the haiku (first stanza) by JRB:

The Popol-Vuh is a manuscript

in which the Creation

is about the Creation according to the Popol Vuh.

There are four deities,

three in a celestial realm

another on the terrestrial plane

so that they may be praised

and venerated by their creation.

they lacked speech, souls, and intellect.
.

“This the Forefathers did,

After that they began to talk about the creation

and the making of our first mother and father;

of yellow corn and of white corn

they made their flesh;

they made the arms and the legs of man.

Only dough of corn meal

went into the flesh of our first fathers,

And as they had the appearance of men,

they were good and handsome men,

and their figure was the figure of a man.”
.

while the first four men slept.

sign on table at China Hill, Ellsworth, Maine, USA.  (c) 2014 Saradunn
.
.bright come hither signs
.
tempting signs sprout like weeds
drool starting words.
.
homemade equals “real butter”
.
calories eak out the sides
.
.
inspiration note:
.
.
Dom DeLuise,
long ago on
“Hollywood Squares”
was asked
“how many calories
in a Snickers candy bar? ”
Dom: “none”…pause
“if you break it in half
and…
he pantomimed
and shook the invisible candy bar
“pouring” the calories out
.
.
For Tanka Poets on Site/facebook
photo May 2014 Kathabela Wilson

Tanka Poets on Site: May 25: Secret life of birds

(On the campus in Shanghai

there is a small forest.

There are very large birds there,

mostly white, some darker ones.

near the tops of every tree.

I have never seen so many at once.

They sing loudly all day long.

Many people seem to know about them when I ask .

but so far no one can say their name?
.
Maybe it is secret.
Maybe you know.
What does your tanka have to say
about the secret life of birds you have known?
.
.
.
My response:
.
.
hiding ~ just like me
.
birds keeping secret lives
.
hide ~ not seen difficult
.
long lens cameras seek
.
advantage:  Big Bird yellow ~ NoT
.
.

The prompt is Raven,
the Creator of the Earth as Native American tales tell us.
There are numerous tales about this Creator
and the creation story as told by the Native Americans.
.
Raven was instructed from birth by his father in every subject
so that the raven could make a world;
after trying many different ways, the raven was finally successful.
The Raven  began to scheme clever plans
and a parallel in some ways to the Biblical story of the creation.
.
.
.
My response to the prompt’s inspiration:

sun moon stars water
.
gifts from Raven ~ ForEverMore
.
light of my life
.
.
.
The story as told on the prompt is at
.
http://chevrefeuillescarpediem.blogspot.com/2014/05/carpe-diem-466-raven-native-american.html 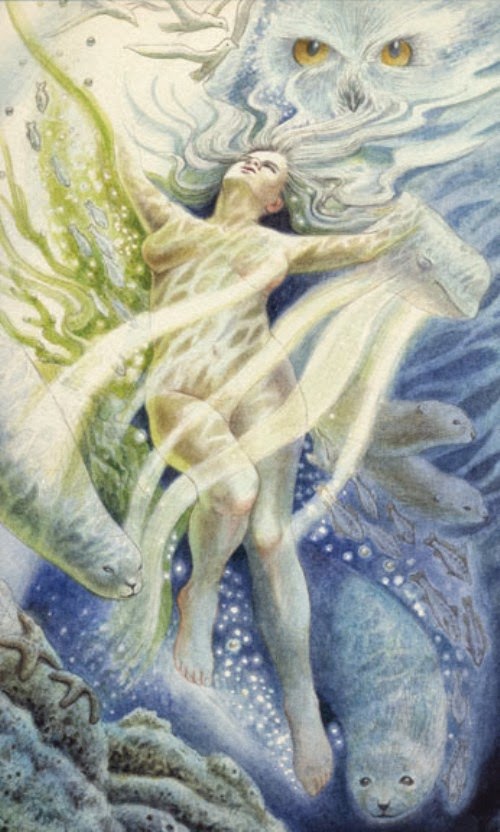 Our inspiration prompt for this haiku is:

SEDNA QUEEN OF THE UNDERWORLD
.
One legend tells how she made a vow to remain single
in order to look after her poor old father.
All suitors were spurned and offers of marriage refused.
.


Then one day a mysterious but utterly charming fellow turned up in his kayak.
He was a handsome foreigner, intelligent, exotic and very alluring.
Not only that, he was rich!
SEDNA was offered blubber in abundance.
Luxuriant furs to sleep on.
All the fish oil she could possibly make use of.
This was too much for a young girl to cope with
and she allowed herself to be lured into his canoe.
.
The marriage was not a happy one.
Although he adored her, she soon came to find him repellent.
“You’re not the man I married,” she often said.
With some justification as it turned out he was really a spooky bird-spirit.
Meanwhile SEDNA’s father was tearing his furs in anguish.
Deciding to pay a visit to his lost daughter, he sailed to the Land Of Birds
and found her in a state of distress.
That evening,
her husband returned home from work and found her gone.
In a screaming rage, the bird spirit climbed into his kayak
and paddled in pursuit at full speed. (He did an awful lot of paddling for a bird spirit.)
.
As he approached, SEDNA tried to hide under some furs,
but her husband became so angry that the skies turned black
and the ocean began to seethe.
That was enough to terrify anyone, and SEDNA’s father,
fearing the very world was coming to an end, chucked her overboard.
Poor SEDNA clutched at the side of the kayak,
but her grim father chopped her fingers off and down she went.
At once the skies cleared, the bird spirit flapped off and peace descended.
SEDNA’s fingers wriggled onto an ice floe and became the first sea creatures,
and SEDNA herself floated to the very bottom of the sea and stayed there.
.
Many many years have passed since then.
Now she rules all Arctic Sea life, deciding the fate of all ocean creatures —
and the people who hunt them.
=====================================
I was unable to figure out how to shorten the story and I hope you enjoyed
reading it.
My haiku inspired by the story:
.
.
Arctic Sea ruler
.
bottom of sea homebody
.
meals provided

May 3 Everlasting
.
on a snowy day
the sun appeared and cheered me
everlasting hugs*
*
Over 20 years ago,
a friend, who has since died,
told me the white baby’s breath
flowers each signified a hug
for when I needed a friend ~
she’d always be near ====
.
grade school dragged
went on and on ~ I wondered
living to graduate *

*
I remember thinking that
it would take an awful long
time to live to be 18… and
I actually wondered how
someone could live to be so
old.
======

pastry to share
bigger half the prize
one cuts, one chooses first
.
May 11: ESSENCE.

other than the standard 5-7-5 haiku forms.

It is a place to  have fun, play creatively,

Somewhere along the line, when the Great Manitou was playing with ducks and sticks,

and making a raft into a world-sized island, and creation was going at a cracking pace,

some mother who had been a deity gave birth to four divine sons.
.
Chakekenapok was her last born son, as sadly his mother died at his birth.

This was doubly unfortunate for him, as the oldest brother Manabozho blamed Chakekenapok

for this disaster and declared himself the protector of humanity.

Then another brother, Chibiabos, died and became protector of the dead.

.
Chakekenapok worked out how to make flints and fire and to take care of winter.

However Manabozho would not leave him alone —

they fought and knocked hell out of each other when and wherever they met.

With a piece of magic deer horn,

Some became flint, his bones became the roots of mountains,

and his squidgy insides turned into grapevines.

So it wasn’t all bad. The last brother Wabasso took over fire duties.

we can enjoy his beauty in the mountains and the grapevines.

signature red chairs
ocean breeze ~ sun ~ natures sounds
we sat at ocean’s edge
shared thoughts, dreams, memories
hidden in plain sight
.
.
A friend showed me a “secret”  public
place in his village of Town Hill, Maine, USA.
.
It was word of mouth to use…if you knew of
it, and and asked at the tourist office they’d
tell you quietly how to find it !
Of course with time, people partied and made
too much racket and trespassed on the neighbors
property and the access was denied.  A new
area without the chairs was made for the public.
.
It was the most peaceful and blissful place I can
think of.  Cares fell away, peace entered.
Indian Point was always a special place in the
universe for me.
.
.
For facebook Tanka Poets on Site

With Marilyn’s permission,  I made a photo with a tag for the first generation of nurses in this family that is now starting the fourth generation of serving the families of Maine, USA, with tender, loving and knowledgeable care.  I trained and worked with Marilyn… a super super nurse… a fine family tradition.  I remembered when her grand-daughter, Emerald, was born when I saw the prompt.

You all may chuckle… my computer is in the shop and on a temporary machine… got it going late Monday…just figured out how to get into my blog !  Hope to be more regular with my posts again… they are giving it a good overhaul.    It was when I locked myself out forgetting or mistyping my passwords that I had to get help.  First at the Senior College computer center and then at the store I bought the laptop… they know me well, and treat me well … smiles.

other than the standard 5-7-5 haiku forms.

It is a place to  have fun, play creatively,