My Response to the Prompt

I was a senior in High School when the Berlin Wall went up.

and not being able to get across it in any way.  You can’t get ther

The heart break and suffering of those left behind …

trying to put my self in that place.  And wonder if I, myself,

Our time challenging feature for this Sunday, June 28th, Time Glass, is The Wall Berlin. Why? My youngest son was at Berlin this weekend, because a friend of him has his bachelor-party there. They had fun and unknowingly he (and his friends) brought me this Time Glass prompt. You have just 24 hours to respond on the prompt given, The Wall Berlin, and the given photo with a haiku. Have fun!

My Response to the Prompt

As I started to prepare this new episode, lagoon,

the first thing which came in mind was the motion picture “The Blue Lagoon”,

with Brooke Shields and Christopher Atkins in 1980.

I remember that there was a lot to do around this motion picture,

because of the nudity scenes in this movie.

I remember that I was excited,

because nudity in such an American movie wasn’t done until than.

Our prompt for today is lagoon

and here are a few haiku which Jane has used

in her saijiki “A Dictionary of Haiku”.

bridge
at the edge of the lagoon
the wind stops

lack of time and inspiration …

I hope this episode will inspire you however.

My Response to Prompts

.Tokubetsudesu gives me the OPPORTUNITY

to bring back special

features we have had here at our Haiku Kai.

This week that ‘former’ feature will be Carpe Diem’s Vision Quest.

.
Do you remember that feature?

Three days on a row to write haiku

inspired on a theme and for every part only 24 hours

and if possible with a slight sauce of cohesion

to bind the three haiku together.
.

So for this Tokubetsudesu episode I love to challenge you to go on a Vision Quest with me.

There is only a slightly little difference with the original feature.

You have to use the three prompts, all with the same theme,

and there has to be some cohesion that binds the three haiku together.
For this challenge I will give you 24 hours extra time to respond.

Here is the theme: at the seashore and these are the three prompts you have to use:

Following my cataract surgery I experienced

many miracles.  The vision of the stars that filled in the gaps

in my previous “normal” sight, I slowly realized what others

could see and how they could identify the patterns in the heavens.

A never tiring experience of wonder for me.

I like to gaze at the stars, not only in summer,

but through the whole year, but especially in summer stargazing,

as is our prompt for today, is a great activity.

Together with the one you love for example,

or just with friends, No clouds

at the night sky, the sultry summer night,

the sweetPERFUME of trees, flowers and bushes.

Just an awesome feeling … surly worth doing sometimes (or more than sometimes).

On Shamrock Haiku I found a wonderful haiku written by Konstantin Kedrov about stargazing:


tired of stargazing,
I look down –
puddle full of stars

And I remember a beautiful tanka by Greg Wolford, one of our CDHK family members,

which he wrote in response on our first episode of “On The Trail With Basho Encore”:

Stargazing it looks like everyone likes it and so do I as I told you above.

There is no night for me without gazing to the stars.

I love to point my children and grandchildren to the constellations

Of course the classical haiku poets like Basho, Buson, Issa and Chiyo-Ni

for example wrote haiku about stargazing

especially around the Tanabata Festival (a traditional Japanese stargazing festival)

on July 7th for example this one by Issa:

at the hermit’s hut, too–
an upturned face awaits
the stars

And I just had to share a haiku by Basho,

which he wrote while gazing at the stars on Tanabata:

surely star-lovers
using as a rug
a deer skin

Well … we are still discovering the beauty of the modern kigo

and today our prompt is stargazing and these are her examples:

coming inside
after star gazing
my glow

our galaxy
in a folding chair
a star gazer

Awesome to read all those wonderful examples of haiku on stargazing …

all those different styles … thoughts and ideas behind it …. just awesome.

I had to share a haiku by myself, but I wasn’t inspired enough,

(one of our featured haiku-poets):

sun and rain
warmth of season
recovery to health

.
note by Saradunn
The past winter on the Downeast Coast of Maine

was especially difficult for all trees including pines…

recovery is seen in many

including the one that towers, tho less so,

I wasn’t aware that pines were a season word for summer,

because I only had the imagination that pines were more of winter,

but Jane Reichhold puts them here in summer.

We are exploring the modern kigo for summer

as gathered by Jane in her saijiki “A Dictionary of Haiku”

and these are a few examples of her haiku

on this modern summer kigo:

a tearing sound
a pine cone OPENS
to the heat

the tea
in a pine needle cup
coolness

And of course I just had to share a few “pine”-haiku by Basho:

pine and cedar
to admire the wind
smell the sound

And than there is this wonderful haiku on pine by Issa:

new summer robes–
listening to the pine breeze
they emerge

but it was really a joy to create this post.

I hope it will inspire you to write an all new haiku. Ok … another haiku “hot off the press” (smiles):

of summer (on the Northern hemisphere). Today it’s June 21st and that’s the real start of summer. At last … summer has come … after a long period of cold and semi-cold weather …. summer is here.

with preparing our list of haiku which are submitted

this week, but during lack of time and being in the nightshift, I can not guarantee that. I have read wonderful haiku submitted

for this kukai and I am looking forward to your

Ok … back to our prompt for today long day/summer solstice … Jane shares the following haiku for this modern summer kigo (seasonword):

And these she shares on summer solstice:

a bluish shadow
our shortest night
in Norway

solstice splits
between the peach halves
a red stone sun

All wonderful haiku as I may say so … it will not be an easy task to write/compose an all new haiku inspired on these beauties. So, forgive me, I have ran through my archives … and I found this one:

Summer Solstice
the longest day of the year
welcomed with music

*) Ra is the Egyptian Sun God

my response to “summertime”

Inspired by the posted prompt:

After a long difficult winter with trees

damaged by ice and heavy snow,  the

brilliance of the greens of trees and the

colors of the perennials I am awestruck

Last Saturday I started a new feature here at our Haiku Kai. I

n this new feature you have no prompts or something

it’s just for sharing your

with us all here at our Haiku Kai and put them into the “poem bag” or Utabukuro.

For this episode however I have a theme.

and this week I love to ask you to share

favorite haiku or tanka about “summertime”.

This favorite haiku can be from a modern haiku poet or a classical haiku poet.

As you have found your

For this episode of Carpe Diem Utabukuro

I have ran through my archives and found the following haiku

which I wrote back in 2012 as spring was departing

This is a cascading haiku about sunflowers.

I like sunflowers, because I associate them with summer,

even when the sun is not there through the sunflowers I can feel summer.

AVAILABLE in yellowish
a great sunflower

bows its head to earth

And here is my all new haiku inspired on this cascading haiku written by myself:

bruised sunflower
it bowed its head to deep –
departure of summer

Not as strong as I had hoped, but I like the opposite scene … 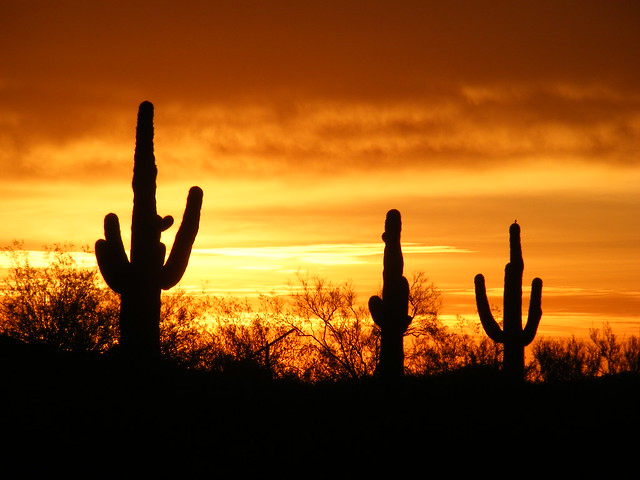 In January/February 1992 I spent six

weeks at The Meadows, in Wickenburg

sunrise was a special

the Midwest and Downeast Maine, the

saguaro cactus was fascinating with its

You will understand that our prompt for today is desert

and these are the haiku which Jane Reichhold

uses as an example for this modern summer kigo:

stars
in the sand
desert GIFT

YOUR voice
tying me to the desert
toast POPS UP

because of the nice FREE style” way of composing it.

style this haiku is very strong and intense.

my own desert
re-decorating the garden
in bright sunlight

the first an oldie from my personal weblog

in the desert
the heat, the sand … my eyes
a Fata Morgana

lost and alone in the desert

just the moon and I

Ah! The desert, one of our wonderful “eco-systems”.

I have learned to admire the desert through the posts of MMT.

Her photos and haiku have done that to me.

My morning greeting leaving the house…

the sun on the ferns, lily of the valley and

buttercups… a moment in time

Another week has gone by and it’sALREADY Wednesday again …

time for a new episode of Carpe Diem Tokubetsudesu

in which the goal is to distill haiku (or tanka) from a other (longer) poem.

And this week I have chosen for

a poem by Raymond A. Foss

Raymond has given me permission to use his poem

and he even send me a haiku he wrote after this poem,